The Most Resilient Airports by Volumes in July 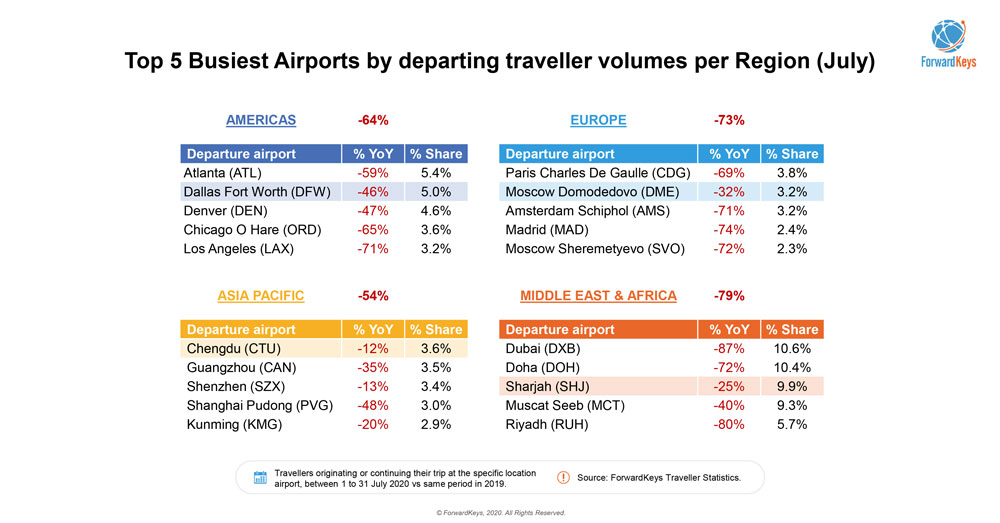 When examining the regional airports worldwide to determine the busiest airports according to departing traveller volumes: Dallas (USA), Chengdu (China), Moscow Domodedovo (Russia) and Sharjah (UAE), despite being in the minus, are still ahead of the pack of other major airport hubs.

The one region to watch in terms of recovery appears to be APAC with the region down by 54.3% in bookings compared to the MENA region, which has been hit the hardest at -79%. Could that be due to the passenger numbers depending so much on international travellers?

The Growth of Domestic Travel during Covid-19
“More often than not, the travel data we’ve been collecting in the recent weeks in showing a similar pattern. People still want to travel and if travel restrictions make it too complicated to venture abroad, they’re spending their hard-earned cash, locally, “says Lorena Garcia, Senior Analyst at ForwardKeys. 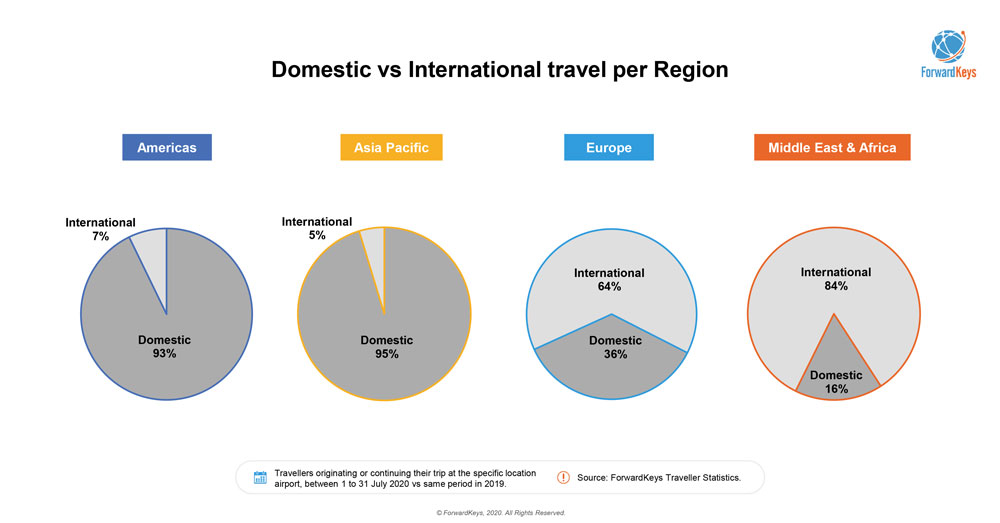 In North America, domestic travel accounted for around 93% vs 77% July 2019 of total travel within the region for that month. Dallas led the pack at the busiest airport this year, but Denver came in a close 2nd. That’s right Denver, not Miami, LA or NY.

To clarify the US trends, the busiest in terms of volumes was Atlanta but Dallas performed better in July as “it registered the lowest YoY amongst the listed top 5, followed by Denver.”

Within the APAC, where also domestic travel registered around 95% of total travel (vs 66% Jul19), Chinese travellers contributed 68% of total air travel in the region. Non-tier 1 Chinese city airport Chengdu (CTU) proved to be the most resilient among top 5 departing airports in the region, following by Shenzhen (SZX). They registered a year-on-year decline of around -12%, far below the regional average for July (-54%).

Lifted duty-free allowances may be another complementary factor. “The increase in Duty-Free allowances and discounted flexible air passes is working a treat in China. It gives us hope that this can transpire in other countries too,” adds Garcia.

Not surprisingly, Europe showed a different landscape with International traffic accounting for around 2/3 of total air travel (64% vs 79% Jul19). Even more so for the Middle East and African region, where international departures registered 84% of total departures in the region (83% very stable when compared to Jul19).

Among the top 5 airports, Moscow Domodedovo (DME) saw by far the lowest decrease of departing passengers this July in Europe when compared to last year (-32%); as it was the case for Sharjah (SHJ) airport (-25%) in the Middle East and Africa region.